Why Soft Drink Are Harmful To Your Health

The most selling products around the globe are not any kind of staple, but the sugar water. The soft drink is so popular all over the world that every now and then, in occasional mood or in non-occasional people like to open a fizzy drink being aware of its disadvantages. According to WHO, 6 spoons full of sugar is enough for an adult for a day, but when you take a 12 Oz can of fizzy drink, 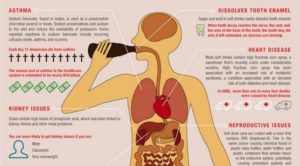 you consume as much as 10 spoons full of sugar with it that are excess and harmful for your health. Food colors frequently used in the soft drinks contain cancer causing chemical called 4-methylimidazole. Some soft drinks contain excessive caffeine that may cross the limit of your regular caffeine demand. Preservatives with their chemical reaction inside the body can be responsible for various types of disorders. And the very four things found in most of the soft drinks with zero amount of nutritional content around the world make it harmful for the human health causing a death toll of 184,000 adults every year. There is no good news for the diet soft drink also. All of them are harmful to human health. Here we discuss major side effect of soft drinks on human health.

Soft drink can accelerate the risk of diabetes
Sugar-sweetened drink has been adding new comers to the list of Type 2 Diabetes because sugar laden drinks high the sugar level in the blood flow lead people to feel hungrier and tired. Overeating is one of the vital cause for obesity and gains over weight resulting Type 2 diabetes. Taking one or above bottle of soft drinks every day may lead you such physical condition and metabolic syndrome.

Soft drinks can be a disaster for kidneys
Soft drinks are also harmful to kidney. The phosphoric acid found in carbonated drinks is responsible for forming stones in the kidneys, disturbances in the system and for some other fatal kidney diseases. Drinking two glasses of fizzy drinks may double the risk of kidney disease, as found in some researchers.

Soft drink can accelerate the risk of heart disease
A Strong link between added sugar and cardiovascular diseases is not a new story. Though in many research has proved it, the consuming rate of this harmful drink has not yet decreased. Some studies found that patients with heart diseases, obesity was habituated to taking at three cans of sugary drinks daily. The most alarming news is that soft drink taking habit kills the sense to take vegetables as a daily diet resulting the imbalance of lipids in the human body accelerates the heart problem.

Soft drink can accelerate the risk of cancer
There is a direct connection between soft drinks and cancer because of the chemicals used in it. The excessive amount of added sugar, the color, the preservatives in it can increase the development of pancreatic cancer, prostate cancer, breast cancer risk in the human body. In brown food coloring agents 4-methylimidazole is found and this cancer causing agent, is available in caramel color cola. The packing materials like plastic and aluminium are also responsible to add some harmful chemical to it.

Soft drinks can cause premature birth in pregnant women
Soft drinks can be fatal for the pregnant women. Again the artificial sweetener is the villain here because some chemical found in it can change the womb environment of a baby carrying mother resulting premature baby birth. As soft drinks affect the womb environment, it can be harmful to the fetus. The caffeine found in soft drinks often diminish the blood flow to the placenta and hampers the normal growth of the fetus.

Soft drinks can cause dental problems
Sugar mingled with soda water and carbonated drinks can be harmful to dental health. Added sugar in soda and soft drinks can form a chemical reaction with bacteria in the mouth and create acid as a byproduct that is to weaken the enamel resulting in tooth decay. Soft drinks are fatal for both developed enamel and underdeveloped enamel.

Soft drinks can make teenagers aggressive and rough
Soft drinks are responsible to make teenagers more violent and lead them to a weapon carrying tendency. Teenagers who take five and above bottle of drinks a week is more hostile to their friends or loved one and rude in nature than that of the non drinker as found in researches. This habit also leads them to drink alcohol and smoke cigarettes.

Soft drinks are responsible for sleeping disorder
Caffeine works as a good stimulant and helps you to get extra energy at your works by increasing rates of blood circulation but it is highly addictive in nature. The caffeine in soft drinks can make you addicted to it as a regular drink. By this, the supply of caffeine may be increased at such a level that it can hamper sleeping behavior and lead you to a fatal sleeping disorder.

Besides these soft drinks can be responsible for some other physical disorder such as fatty health, obesity risk in children, Asthma And COPD early puberty, premature aging, Osteoporosis And Bone Fractures. We said at the beginning that there is no good news for diet soft drinks because the artificial sweeteners such as aspartame, sorbitol used in soda or other diet drinks have links with cancer development and bowel syndrome.

Tags: dental harmful of soft drinksoft drink risk for cancersoft drinks are harmfulSoft drinks can be a disaster for kidneys
ShareTweetSharePin