Reduce Alcohol And Dementia to Live Better From Now.

Throughout the first 1,800 years, use of alcohol in daily life was common and alcoholic beverages were very popular. From the history and tradition, alcohol or alcoholic beverages are considered as joyous foods in The Christian tradition because moderate consumption of these alcoholic foods make life more joyous and enjoyable. Since then alcohol is so popular in the western culture. Even the name and consumption of alcohol are broadly appeared in the literature. But there is clear link between alcohol and dementia.

Alcohol: Alcohol is kind of drugs which is characterized by elements of organic compounds in which hydroxyl functional group is bound to a saturated carbon atom. The primary use of alcohol is as ethanol which is used in the alcoholic beverages. In the united states of America, there are different kinds of alcohol consumed and they are whisky or beer type. These types of alcohol are popular. Research and study say that moderate use of alcohol may have health benefits but consumptions of alcohol at excess do have many more side effects. In the United States of America, there is legal age to consume alcohol and it is 21 in all states and there is strict law about buying alcohol by under 21 age. 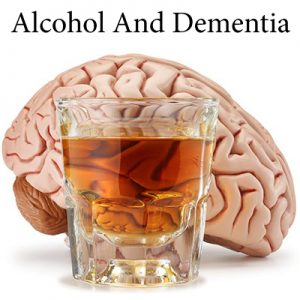 What is dementia: Dementia is categorized by some brain diseases that has long term incapacities in cognitive function. Cognitive function of human body is the most important function through which we think, make decision and planning. But when mental ability is declined like memory loss complications, people face some common problems like forgetting what is done even if 5 minutes ago. The most common form of dementia is Alzheimer’s disease. So it can be said that drinking alcohol and dementia is one of the most critical health complication that stops a people’s continuous growing. About 46 million people have dementia disorder and this disorder is increasing around the world. because of some unhealthy practices of human. There are some mental functions as impaired for dementia and drinking alcohol.

Causes of Dementia: Brain cells are most important part for cognitive function through which we think and make decision. When damage to brain cells occurs, then thinking, behaving and feeling have disorder and they cannot work properly. Excess amount of alcohol cause to dementia highly.

How alcoholic compound affect the brain: Drinking alcohol at excess has been shown to develop shrinkage and atrophy of the brain which lead to neurodegenerative changes and impairment of cognitive function. This shrinkage of the brain tissue is also associated with Alzheimer’s disease.

Cholinergic function is the brain’s controlling receptors it is important function for memory through which we keep information in our memory. Long history of alcoholic compounds has been confirmed as deficits in the cholinergic system, such as lower levels of acetylcholine and fewer receptors (proteins that bind to neurotransmitters and it also controls overall cognitive function of human brain. Study finds that excess alcohol use causes damage to brain cells. Drinking alcohol and dementia has some adverse effects on brain which are discussed below.

How does alcohol cause brain damage: Research finds that alcoholic compound is linked with heavy risk of brain cells and it damages brain cells very perfectly, so people with dementia by examining long history of alcoholic history are susceptible to chronic brain loss. When someone is diagnosed with early onset dementia, some health complications may be found and they affect whole life by following behaviors. Here are some alcohol brain damage symptoms.

Memory loss: Consumption of alcohol has a link with reduced memory power and study finds that those who have already dementia may have serious illness for memory loss. Memory loss can be defined that forgetting facts even before occurred 5 minutes before. A new study says that excessive consumption of alcohol has serious result on set dementia and dementia patients are less productive from people who don’t drink alcohol.

Less Ability to pay attention: People drinking alcohol are absorbed in drinking and they don’t have any interest or active concentration on the task. When they attend in meeting or discussion, they have lack of concentration and less ability of to pay attention to the task that is being discussed in the meeting. Excessive alcohol might cause to brain damage and it is difficult to get back your brain power on track when someone has this complications.

Reasoning and judgement: Making decision or judgment is found inactive for those who have already alcohol dementia. When someone is in the important decision making process, they are less active to use judgement on proper way as they are distracted from the concentration. In this case, they make wrong decision or may be cheated by dear ones also.

Communication: Too much intake of alcohol is linked with poor communication and communication may be in vain. Alcoholic compounds can make someone abnormal and most of the cases it is often seen that people drunk with alcoholic behave abnormally so communication fails due to consumption of alcohol.

What can be done if dementia diagnosed: Alcohol related dementia treatment may be difficult to diagnose dementia because a doctor has to look through long term medical history to find out this complication. A neurologist may diagnose people with dementia and obviously it is so important keep brain healthy with healthy foods like Mediterranean diet. Mediterranean diets are mainly whole grains, fruits, vegetables, fish, lean meat and nuts. Even there are some ways to follow to reduce. This may be better for alcohol dementia treatment.

At last It can be said that anyone need to control drinking alcohol and dementia anyhow. Change is good and when you are habituated of too much drinking’s, it is going to kill you and a lot of work and commitment to be healthy should be life’s main aim. Even you find your friends or family who are going to be supportive in every sphere of your life.